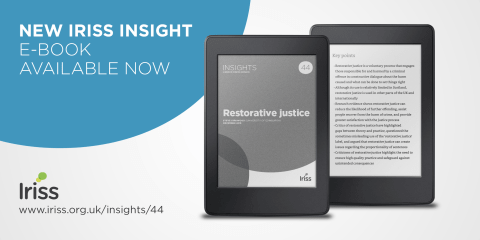 We've had a flurry of activity in the production of Iriss Insights this winter, with two new additions to the series on quite distinct topics.

First published was Good practice with adults in adoption, which is about adults (adopted people, adoptive parents and birth parents), and is concerned with the people and relatives relating to adoptions prior to the 1980s when the vast majority were relinquished by birth parents (as distinct from many of today’s adoptions from care which involve opposition from birth parents). It was written by Gary Clapton at the University of Edinburgh.

More recently we've published an Insight on the topic of restorative justice, which defines restorative justice, outlines the evidence on its use and impact, and discusses its current and potential use as a response to crime in Scotland. It was written by Steve Kirkwood at the University of Edinburgh.

In January / February of 2019 we'll be publishing Insights on the topics of social media and social services; and the impact of participation on services and the people who use them. If you're not already on it, join our mailing list to keep up to date with the latest news and resources.