It’s been a little over six months since our event, chaired by Lesley Riddoch and held at GCU during word social work week in March. The day was a great success, and we want to share some of our reflections and the resources from it – especially for those who were unable to make it along.

Back in March, some 70 representatives from across and beyond Scotland’s social work community came together in Glasgow’s Caledonian University for a busy afternoon to look at their roles in advancing the case of the country’s oldest and longest-neglected ethnic minority.

Chaired by journalist Lesley Riddoch, and opened by Trisha Hall from SASW, presentations were made by leaders in the field: activists Shamus and Roseanna McPhee, and Ken MacLennan, a social worker whose landmark Legal case (K MacLennan v GTEIP) secured legal recognition for the ethnic minority status of Scottish Gypsy Travellers in 2008. This, in theory, provides Gypsy Travellers legal protection under the Equality Act 2010 and earlier Race Relations Act (1978).

Combining efforts, Iriss and SASW co-sponsored the event and co-produced the day with the Insight authors.

All three were involved with Colin Turbett (author and activist) in producing our Insight 35, an evidence summary, which draws out implications for social work. This highlights historic mistrust between public bodies, including social work. It calls for more culturally sensitive approaches and recognition of power differentials; the need to build knowledge and trust, the need for effective advocacy and approaches that are about 'doing with', not 'to.'  Organisations need to think of a range of things, from organising awareness raising sessions for their staff, to how they engage participation from Scottish Gypsy Travellers, for example, through staff and foster carer recruitment, at local and national policy levels, and local user forums.

The Insight also calls for greater national leadership on this issue,  and proposes  regulatory and inspection bodies consider culturally sensitive practice in their scrutiny functions. Interestingly, a recent initiative in Wales - Stories on Health and Wellness - by NHS Centre for Equality and Human Rights and Romani Arts and Cultural Company - collected 100 stories from young parents and older carers, digitally recorded by members of the Gypsy, Roma and Traveller community themselves. In ground-breaking work, these will form the basis for an e-learning module  which will be built during 2017 and be compulsory for all NHS Wales staff.

The day was clearly enhanced by the presence of a number of Gypsy Travellers who expertly lent their experiences and summed up some of the challenges they face.

A big thanks is also due to Amnesty, the Scottish Human Rights Commission, MECOPP and Article 12 in Scotland for delivering popular world cafe sessions on the day -  highlighting previous campaigns, research and publications that provide evidence of the widespread discrimination Gypsy Travellers continue to face, unacceptable living conditions and how a human rights framework can help.  Article 12 focus their efforts on supporting young Gypsy Travellers and MECOPP, Gypsy Traveller carers. Through MECOPP, you can also book awareness raising training delivered by Gypsy Travellers themselves. You might want to consider this for your own organisation?

We'd also like to thank those who brought their exhibitions – and thanks to Roseanna McPhee for being an expert tour guide.

Last, but not least, we also owe a big thanks to Glasgow Caledonian University for our venue during world social work week, the fabulous 'Lantern' space!

For me, my own personal highlight of the day were the two dream sequences presented by Shamus McPhee and Ken McLennan. I’d asked them if they could do their ‘own version of a Martin Luther King’ speech. Tall ask, I know! Have a listen (Transcripts attached). Their dreams burn bright in different ways. Shamus’s is more personal, drifting in and out of consciousness with hopes as to what the future should be like - his culture and rights recognised - before sinking back to frustration, sometimes despair in his ‘waking’ moments. It provides insight in how it might feel to be a Gypsy Traveller in 2017. Ken’s dream is more of a direct call for action, for people to leave their comfort zones and not leave the job to others. Speak out, up and don't stand by.

The day ended, as it began, after an expert panel session, with beautiful music and song from Elena Piras as a celebration of cultural heritage and identity - too often denied, misunderstood or mis-appropriated by others. As the Insight highlights, Gypsy Traveller's contribution to Scotland's cultural diversity should be better known and valued.

Which takes us nicely to the production of the Gypsy Traveller pictorial timeline  we commissioned Shamus to do. All research and original art work is by him. This was  motivated by a desire to challenge current misconceptions, lack of knowledge and basic understanding about Gypsy Travellers in Scotland.  This is  now available as a poster and training resource, by following this link.  Copies are free, but limited.

This history  helps explain current mistrust between Gypsy Travellers, social work and other public services- stressing the need for culturally sensitivity practice to help overcome. This timeline is also a battle for human rights and recognition as a distinct ethnic minority. Interestingly, IrishTravellers, or Pavees, did not achieve ethnic minority status in Ireland until earlier this year. 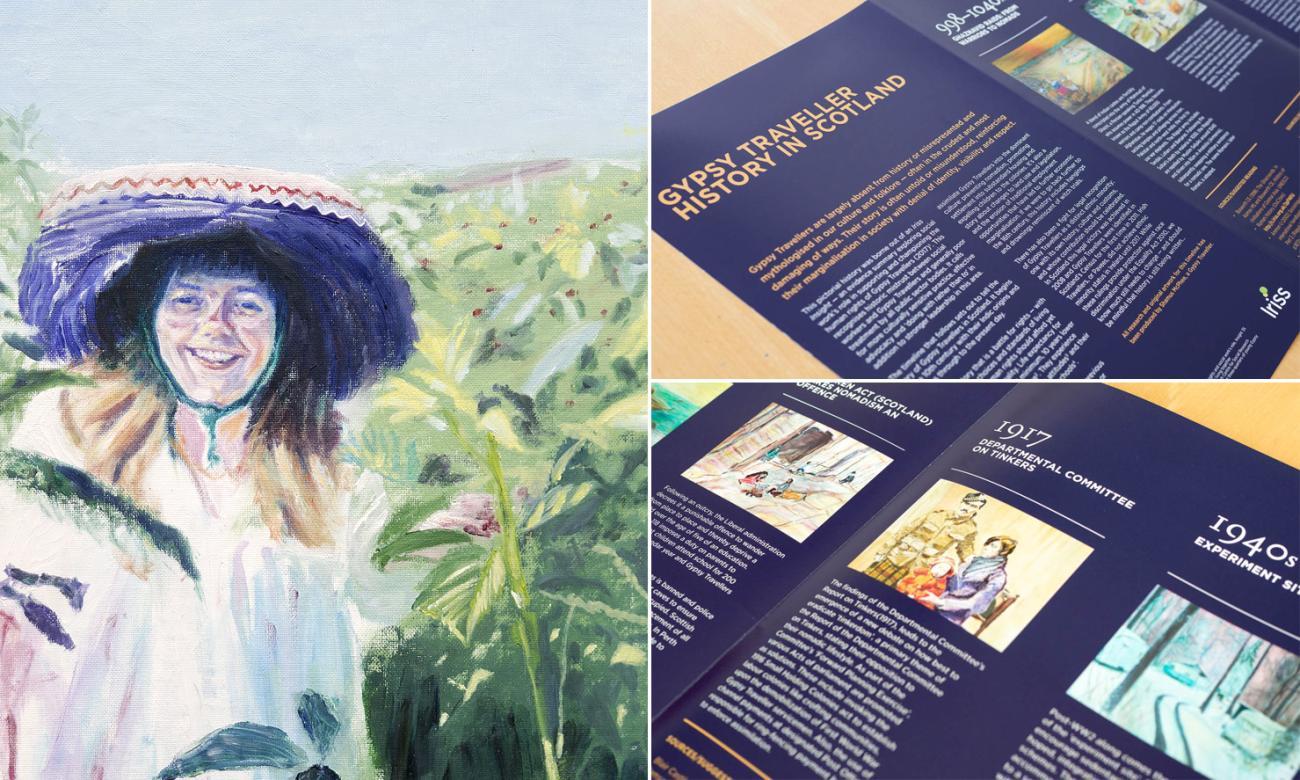 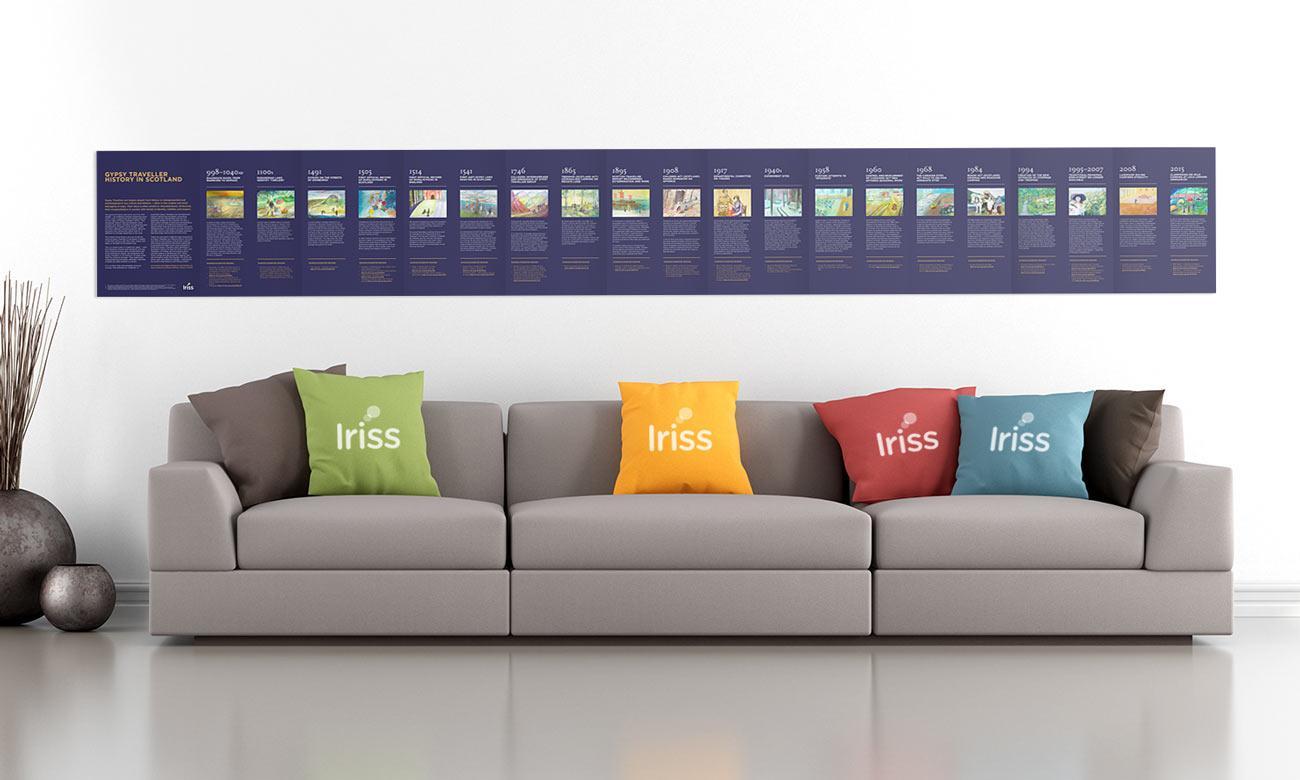 At the launch we interviewed a few participants, the following video provides thoughts on some of the opportunities and challenges faced.

Since the March 2017 event, three of the four Insight authors have contributed a workshop at the Keeping It Real: Service User and Carer Involvement in Professional Education conference at Stirling University on 26 April 2017. This was a fabulous day, which you can read more about in this feature, with links to a short video that includes Roseanna McPhee's thoughts on how this relates to the Gypsy Traveller community and the education of student social workers.

Congratulations are also due to Shamus, who launched his Hidden Treasures website to celebrate Gypsy Traveller art, culture and heritage. This, as I see it, is about building knowledge and understanding between the Gypsy Traveller and 'settled' communities, and being loud and proud about who you are as a Gypsy Traveller.

The website followed an event at Pitlochry Theatre on 11 June 2017, and captures most of this and more in pictures, audio and video. This includes art exhibitions, storytelling, and presentations on hidden or little known history, too often buried in archives or local libraries. Clearly, there's still work to be done. It also included participatory craft workshops, music and dance on the day. For those who don’t know, 2017 has been billed as the ‘Year of History, Heritage and Archaeology’ -  so another good reason to highlight the contribution of the Gypsy Traveller community in society.

Feedback from the Iriss/SASW event in March 2017 has shown that many present were hearing about the institutional racism faced by Gypsy Travellers for the first time and if that is taken back into their organisations, it can only be helpful. Ultimately, however, outcomes can only be measured by progress made in taking forward the issues raised.

While individuals present saw opportunities to improve their practice, and unforeseen connections were made to highlight the historic abuse of Gypsy Traveller children, linking with CELCIS, there remains an un-tapped opportunity. That is for key organisations, unable to make the event, to consider action and be part of a bigger conversation with others. Challenges were made to the social work profession and others to show leadership on this issue within the public sector.

Why is change so slow?

Is the Equal Opportunities Committee Report of 2013 and Amnesty International correct in concluding that we need: a specific minister to take responsibility for supporting Travellers and holding Local Authorities to account; a national awareness campaign to tackle widespread discrimination and racism towards this community?

Human rights are universal, but does the mix of discrimination that Gypsy Travellers face, irresponsible journalism, combined with financial austerity in public services and our political system, leave the un-met ‘universal’ rights of minorities ‘not a priority’, ‘political suicide’ or potential vote loser for politicians and public leaders to champion?

By universal human rights, we need to remember we mean real tangible things, like access to decent accommodation (and an offer of something culturally appropriate), access to public services like health, social care and education to prevent Gypsy Travellers dying 10 years before your average Scot. We're also talking about tackling access to schooling,  discrimination and bullying that leads to social and economic marginalisation - and not surprisingly, poor mental health. We also mean treating people with respect, so things are done 'with' and not 'to' the Gypsy Traveller community and that the PANEL principles in Scotland's National Action Plan for Human Rights (SNAP) are applied. PANEL, if you aren't familiar with it stands for: participation; accountability; non-discrimination; empowerment; legality.

What you can do