This is one of seven case studies that celebrates what ‘community social work’ is and has to offer.

It demonstrates how working closely and in partnership with communities makes the best use of resources, generates new capacity and greater agency, builds resilience, and supports preventative approaches that make a real difference to people’s lives. It also has much to offer at a time of reduced public spending and pressure on services.

An initiative in 2012-13 to encourage Roma and non-Roma families to claim clothing grants and free school meals, with a positive effect on the school community and beyond.

The Asylum and Roma team embarked on a review of social work referrals from local schools in Govanhill, Glasgow as part of Roma-Net, (see appendix 1) a wider EU-funded consultation into the needs of the Romanian and Slovakian communities. It uncovered a number of common issues. Keith Moore-Milne, Team Leader at the Asylum and Roma Children and Families Team at Glasgow City Council led the consultation.

In particular, referrals were highlighting children who were consistently hungry, sometimes resorting to taking food from other children. Others did not have suitable clothing or footwear for the Scottish weather. As a result, some of these children were arriving hungry, cold and wet at school.

Further research revealed that a high proportion of Romanian and Slovakian Roma families, often living in poverty and in overcrowded homes, were not claiming the free school meals and clothing grants that they were entitled to.

The approach taken was two-pronged - not only to help the individuals who were referred to social work, but to take a broader, community wide approach. As a first step to get families more involved with the school, the Community Development Officer attached to the Roma team, Catherine Shields, led Primary 1 induction sessions. At these, parents were able to try the food provided by the school kitchens. This reassured them, and dispelled some preconceptions that school lunches were just sandwiches rather than full meals.

The school was identified as a safe and accessible place for the information and sign-up initiative to be based, as parents were already familiar with the surroundings and would be at the building to drop off and collect their children.

The initiative was informed by a basic principle that it should be a 'whole school approach' - every child and parent in the school, not just Roma parents, were offered a welfare rights check. This approach made sure that everyone was included.

Over a three-day period, the school staff spoke to parents in the morning to encourage them to come in. Word-of-mouth then did much of the rest. Through Roma-Net, leaflets were translated to explain the support that was available. Jim Digney, a specialist in welfare rights, was also available to provide support, along with Govanhill Development Trust Welfare Rights personnel. Representatives from Education HQ, responsible for processing applications, were on hand to check the paperwork. Amy Cloke, a Romanian speaker from the Non-Government Organisation, Crossreach (see appendix 2), was also involved, as were interpreters (two Romanian and two Slovak, funded by social work). Funding for leaflets and signage came from Roma-Net.

As a result of the initiative, from a school of just over 200 children, around 75% received additional support, the majority from the Roma and Slovak communities.

It wasn’t a huge amount of money, but it’s so difficult for schools or for my service to get wee bits of money for things as it’s all tied up in budgets, so that’s often what prevents initiatives happening - you get tied up in trying to find a home for the costs of getting a leaflet printed. It’s not an argument, it’s usually just an inability to fund anything not designated in the budget. So the few hundred pounds of funding from Roma-Net really helped to oil the wheels of the whole initiative.

Annette Street Primary had a population of 220 in 2012. 40 children were assisted to receive free school meals – 19% of the school population. Another 18 siblings in other schools benefited too - a total of 58 children.

In addition, 81 children were helped to get clothing grants – 62 of them from Annette Street, 29% of the school population. The other 19 were siblings in other schools. The extra income generated for children in the first year was £31, 320.

Head Teacher, Shirley Taylor says that the school saw a marked improvement. 'We found that the children were much more focused and became really keen to come to school, because they knew they were coming in and they’d be fed.'

Furthermore, by speaking to the families about the meal and clothing assistance available to them, the team was able to refer them into other services that could help them further.

It’s much more interactive, the parents are enthused about the school. I’ve always found Roma parents to be aspirational for their children, but I think they have a better understanding now of how they can support them in that.

What worked well and why

The initiative worked well because it built on the strengths of the community. It used the school as a central hub where the parents were present already, giving them access to the facilities that their children would be using, to show what the school could offer. It used multiple communication methods, not just relying on leaflets. Focusing the activity over a short period of time gave the whole initiative momentum.

By giving parents the tools and confidence to improve the lives of their families, the school has seen greater engagement across the board:

Increased trust and engagement with the school has led to Roma parental involvement in a cook-book club, digital literacy sessions and a greater understanding of how to help their children achieve their goals. Overall, the initiative has improved the trust and enthusiasm of the parents for the school, which has a ripple effect for the children’s engagement and outcomes.

This in turn has led to further joint working (co-production) with the families to plan activities, such as trips to the swimming pool, applying for KidsCard, a visit to the People’s Palace in Glasgow, improved links with maternity services and also with NGO Community Renewal (see appendix 3)

In addition, 25 parents (mostly Roma) subsequently formed a parent support group, which successfully influenced the People’s Health Trust to provide a grant of £700k over seven years to Community Renewal.

Mapping the development and influences

The Annette Street initiative was the team’s second attempt at increasing the uptake of services. The first had been at Cuthbertson Primary, but this was less successful, partly due to a story going round the Roma community suggesting that social services in England were seeking to separate Roma children from their parents. Although entirely inaccurate, this bred distrust of social services in Glasgow, a barrier that was extremely difficult to overcome.

However, the lessons learned about how to approach the parents, how to gain buy-in and how to empower them to take control of what they wanted for their community, led to the successes at Annette Street.

There is a challenge in getting parents to re-apply for free school meals and clothing grants when they need to. Providing reminders to parents is an on-going issue, to keep those entitled to payments claiming what they are due.

Literacy levels caused issues, so sending out leaflets was not the best way to contact all the parents. Data protection issues also meant that the Roma team could not hand over lists to the social work team in order for them to make phone calls. However, the school was able to bring a fluent Romanian and Slovak speaker into the school to make the calls instead.

A further challenge for initiatives like this is sourcing funding at all - as highlighted earlier, making provision within fixed budgets for the relatively small amounts of money this type of work requires can be disproportionately difficult. In this instance, the assistance of Roma-Net in funding the interpretation and production of leaflets and posters was invaluable.

Following on from this initiative, the £700k funding secured by parents and the NGO ‘Community Renewal’ is to be used for the benefit of the whole community, with a focus on Roma members. This is a more inclusive way of supporting a disadvantaged group of children without excluding other members of the community, and helps to build the community as a whole. Community Renewal has carried out a community consultation with over 300 people to gather thoughts and ideas on how best to use the funding. One of the ideas being discussed is to develop a Social Enterprise Laundry. Inadequate washing facilities in private rental accommodation are an issue for some of the low-income families. The laundry could provide work, as well as a much-needed service for the whole community.

Five years on from the original initiative, levels of free school meals are receding again, so there is a case for a regular cycle engagement with parents. Particularly now that Primaries 1-3 have free meals provided via Scottish Government policy, there is a need to reiterate the message for those in Primary 4 and above.

Despite efforts at local, national and European levels Roma populations continue to face high levels of social exclusion and poverty. Partners of the project believe that integration of Roma populations is a key factor in a cohesive society, as well as in delivering the goals of the Lisbon Strategy.

The Roma-Net partners have a united desire to share expertise and to spread good practices in the hope that it will improve local policy development and deliver capabilities for stronger community cohesion between Roma and their neighbouring communities.

An overarching objective of our partnership of nine European cities is to inform and support our city partners to develop local action plans that facilitate better services, through improved access and integrated approach, to support the social inclusion of young Roma and their transition into active adult citizens.

Change comes from the step-by-step inclusive approach. As Roma-Net partners, young adults will motivate positive change and provide insight into the barriers and challenges caused by social exclusion.

CrossReach was launched in June 2005 and was previously known as the Church of Scotland Board of Social Responsibility.
They employ more than 2,000 staff and we support some of the most vulnerable people in Scotland. CrossReach has an annual expenditure of £51 million. Most of our funding comes from local authorities but also relies on donations and legacies.

CrossReach (the Church of Scotland Social Care Council) reports each year to the General Assembly and has the following remit:

Community Renewal transforms communities by empowering and engaging individuals in community activity to improve their health, learning and employability.

Thanks to everyone who contributed to this research project. With particular thanks to Keith Moore-Milne of Glasgow City Council (Social Work) and to Shirley Taylor at Annette St Primary School.

Thank you also to Community Renewal, Friends of Romano Lav and Media Co-op for their kind permission to use the photographs of and by young Roma people in this case study.

For more information about this work contact Project Lead: kerry.musselbrook@iriss.org.uk 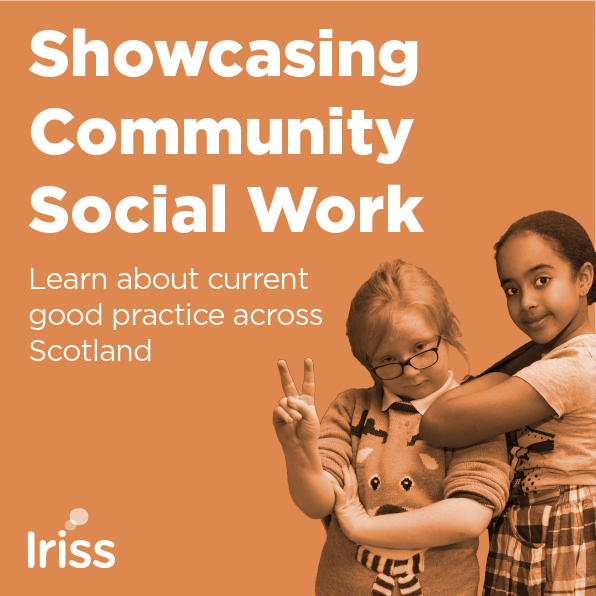