In Full Voice - the uniting power of music

“When you sing, musical vibrations move through you, altering your physical and emotional landscape. Group singing, for those who have done it, is the most exhilarating and transformative of all.” (‘In Full Voice’ choir member).

It all started in autumn of 2013. IRISS had drummed up the idea of creating a social services choir -  a choir that would embrace anyone working in the sector, or those being supported by services to bring their voice to life. A small team got together to discuss the logistics - venue, a choirmaster, number of sessions and how to get people involved. We were very lucky to have the support of the Social Care Ideas Factory, and to find Gregg Muir (Initium Arts) and Matt Regan who were available to lead the choir.

On 7 October 2013, the first of ten weekly singing sessions kicked off at the beautiful Wellington Church in the west end of Glasgow. To great surprise and delight over 40 people turned up and there was a nice balance of men and women to give the songs great tone and texture. Each session started with a series of voice warm-ups, accompanied by hilarious banter from Gregg and Matt, which had everyone immediately laughing and smiling, and ready to take on the singing. Not only was being part of this choir fun, it created a level ‘singing’ field, connecting people from all backgrounds (regardless of role) and uniting them in ‘full voice’.

“Singing together really is one of the best ways to break the ice and get to know each other… We’ve been getting chattier and chattier! Some great personalities are starting to show, and in between all of the joking (and Gregg going on about his great shoes) we got great work done on our three songs, Lean on Me, You Make My Dreams Come True and Hounds of Love (‘In Full Voice’ member).

By Christmas, there was a real desire amongst members for the choir to continue into the new year and many more were interested in joining. The Social Services Expo and Conference 2014 was due to take place on 18 March and it was agreed that it would be excellent to work on a number of songs to perform at it. So another ten weeks of Monday night singing at the Hillhead Library in Glasgow was arranged, which culminated in a performance at the Expo. It was a big occasion for everyone and got a fantastic response from the audience. 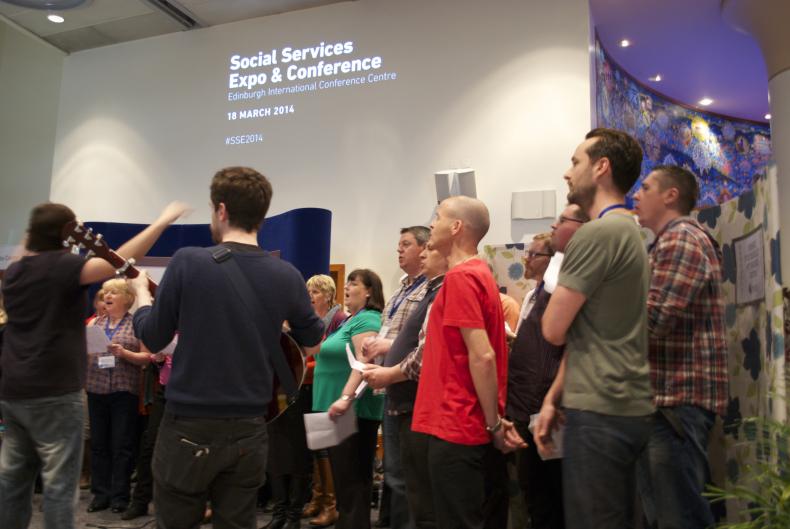 We also received a couple of stories from individuals who supported members to attend.

Ian was supported to attend ‘In Full Voice’, a social services community choir which was held every Monday evening in Hillhead Library in Glasgow. This choir was very inclusive - participants come from many social care services as either providers or users of social services.

Three staff members from our services also attended the choir to support others who were interested in participating. As choir members are divided into groups according to their vocal range it was important that Ian had male support that could stand alongside him in the tenor section. Ian was supported every week and gave assistance where it was needed. The worker also found his singing voice!

Ian also participates in the musical memories evenings that are held monthly in his local Dementia Resource. He has shown that singing was something that he really enjoyed and we were aware that he had been a member of a choir previously.

Ian attended ‘In Full Voice’ every week, he learnt new songs and verbally expressed his enjoyment at the end of every session. The ten-week programme culminated in the choir putting on a performance at the Social Services Expo held at Edinburgh’s International Conference Centre. This was a highlight for the choir members and Ian was filmed along with the rest of the choir on the day. He thoroughly enjoyed the whole experience and often asks when the choir will be starting up again.

Ian has since joined a community choir in his own area called ‘The Allsorts Choir’.

Gina attends the musical memories evenings that are held monthly in our resource centre.

Although Gina has word finding difficulties she enjoyed the music nights. Two staff decided that they would join a social service community choir which was held every Monday night at Hillhead Library in Glasgow.

Gina was asked if she would like to go along and readily agreed. From the first week, Gina loved it. Although profoundly dyslexic and not able to read the song sheets, she and Janet devised a way to work together. Gina would stand facing Janet and Janet would sing the words to Gina, as if to give her the words. This worked very well and Gina grew in confidence. This was the format that was worked to every week.

She learned and retained new words and music, and her word-finding difficulties were less marked while singing. Gina would end every session by saying ‘that was amazing’ or ‘that was brilliant’. When we became aware that new funding would need to be found to make sure that the choir continued, Gina personally approached the choir master and said that it was vital that this choir had to continue. He directed her to the organiser and she again, went independently across the room to express her love of the choir and how she felt it was vital to find a way to keep it going.

Gina could not attend the performance in Edinburgh as she had a very important medical appointment scheduled and this could not be changed, which was disappointing. Whenever Gina saw me in the the weeks following she would ask when the choir was starting up again, and she and I would give the others in day care on any day an impromptu rendition of all that we had learned at the choir.

The singing goes on

In the summer of 2014, individual members took responsibility for administration and for actively seeking funding for the choir.  And all the hard work finally paid off. In October, the choir held a performance at Theatre Nemo, announcing that it had been granted £7000 from the Big Lottery Fund! It was such an achievement.

The choir is looking forward to performing at events aligned with the Scottish Mental Health Arts and Film Festival, and in the beautiful surroundings as Princes Square to raise funds for Quarriers this Christmas. Pop along and hear what all the fuss is about!

‘In Full Voice’ has become a truly all-inclusive, self-sustaining group of singers that has demonstrated commitment and passion to the singing, and compassion and dedication to each other. It is a venture that IRISS has been proud to be part of and support. Long live ‘In Full Voice’ choir.

Joining 'In Full Voice' choir is open to all, with no audition required. All levels of singing and ability are welcomed with good chat and great music

'In Full Voice' rehearses on Monday nights from 6-8pm in Theatre Nemo Studios, 130 The Briggait. If you would like any more information, please feel free to get in touch by email: Infullvoice@gmail.com.