This is one of seven stories, showcasing what service user and carer (SUAC) involvement in social work education looks like, what makes it work and what benefits it brings. It has a significant role to play in shaping the next generation of practitioners.

SUAC involvement in social work education has been mandatory for 15 years now, so there is a lot of learning to share with others who can learn from this - transferrable to  educators and practitioners working across public services, and relevant to policy-makers committed to mainstreaming person-centred – or person-led – approaches based on real partnership working between those who use and those who deliver services.

Unity, the service user and carers group at the University of Stirling, was established in 2005. This group was formed to recognise the important contribution that people who use services have to make to social work education. The group is made up of service users and carers, as well as social work student representatives and academic staff who act as group conveners. Many of the group's founder members continue to be involved, along with people who have joined more recently. They meet at the university on a six weekly basis with additional meetings around specific projects as required.

The activity of the group currently, and over recent years, has been wide ranging. They have delivered a variety of workshops with students, including sessions around mental health and what an ideal social worker looks like. They have designed the case study scenarios used for the social work student application process. Service user members have also been involved in running sessions at academic and practitioner conferences across Scotland, as well as being a member of the Scottish Inter-University Social Work Service Users and Carer Network.

One key example of this wider involvement was the Keeping It Real conference at the University of Stirling on 26 April 2017 which celebrated Service User and Carer Involvement in Professional Education and the difference it makes. This conference was designed and run by the Unity group.

Prior to embarking on practice placements, social work students at Stirling practised professional communication skills with Unity members who have experience of social work services. The students undertook role-play interviews with service users about real issues, which had led individuals to seek assistance in the past. Using principles of co-production, the role-play sessions were developed in partnership with members of the Unity group.

Sara Hitchin, a lecturer at the University of Stirling, was convener of the Unity group and course coordinator for the Theory and Practice of Social Work module. She describes in the video here: how the role-play sessions came about; the practicality of how they happen; and some of the benefits that she hopes are felt by the service users and students who are involved. Sara has also written an academic paper on the role-play sessions.

Six members of the Unity service user and carer group at the University of Stirling talk below about their involvement in the role-play interviews with social work students. They describe how they prepared for the sessions, their experiences of that contact with the students, as well as their hopes for what the students gain from the sessions.

We asked some of the students who had been involved over the last two-years about their experiences of the sessions:

What did you expect before you went into the role-play session?

The role-play session was a huge source of anxiety for many of us students. Having practiced it with other students prior to the session with Unity members, and having found this extremely difficult, I was dreading it. I expected my nerves to be terrible, and did not want to freeze and make a fool of myself

I was pleased that the Unity members were using real situations, as I feel that role play situations can sometimes be quite contrived.

How did the role play session with service user and carer input make you feel?

I felt extremely grateful that the people involved took the time to help me in my learning. It was also a very humbling experience, and demonstrated the value of taking service users' experiences into consideration when developing who we want to be as social workers.

I found the role play session very encouraging and empowering. My service user was not scary to talk to at all! He gave me really useful feedback concerning the best way to engage with people in an interview setting.

How did your understanding or perspective change from being involved?

I found it enlightening to speak to Unity members about the good and bad experiences that they had with social work. I found that they were not shy in telling students the absolute truth about the career we have chosen.

it is much more intimidating for service users than professionals; they are often put in a position of having to talk about painful personal experiences with a stranger in order to get support.

I was so pleased to leave it feeling that it was such a valuable experience. It had really helped me think about different ways of approaching certain circumstances and to develop my communication and interviewing skills.

How do you think it will impact your future study/practice?

During both of my social work placements, I have found myself drawing upon the skills and techniques I had learned during the session when working directly with service users. I think that the session was an imperative part of preparing me for going out into practice and thank Unity members for helping me in my journey to becoming a newly qualified social worker.

I found the role play scenario very nerve wracking, but extremely useful for building experience, and for improving my confidence when working with service users.

helped me to gain confidence in my ability to practice as a social worker. It also gave me an understanding of what service users find helpful from their social worker or practitioner. For example, having a friendly manner and a non-judgemental approach.

Thanks to Siân Lucas, Sara Hitchin and all the members of the Unity group at the University of Stirling for giving us their time and sharing their knowledge and experience. 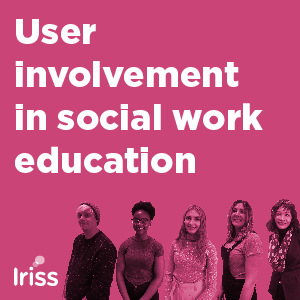