Gathering feedback about staff qualities and capabilities from people who use services: using Talking Mats and the Continuous Learning Framework
By Iriss
Published on 9 Jul 2012

St Joseph's Service is part of a registered national charity- Daughters of Charity of St. Vincent de Paul. St Joseph's provides support services for people with a learning disability in Midlothian and Edinburgh. The Service supports 85 people through person centred planning and service delivery in a variety of locations. St Joseph's is set up in circles of best practice which ensures their focus is on connection, friendship inclusion and belonging. Community involvement is essential to St Joseph's effectiveness as is working in partnership with others.

Many of the people supported lived within St Joseph's Hospital prior to its closure in 1999. People now live in their own homes supported by some of the 200 staff employed by St Joseph's Services. 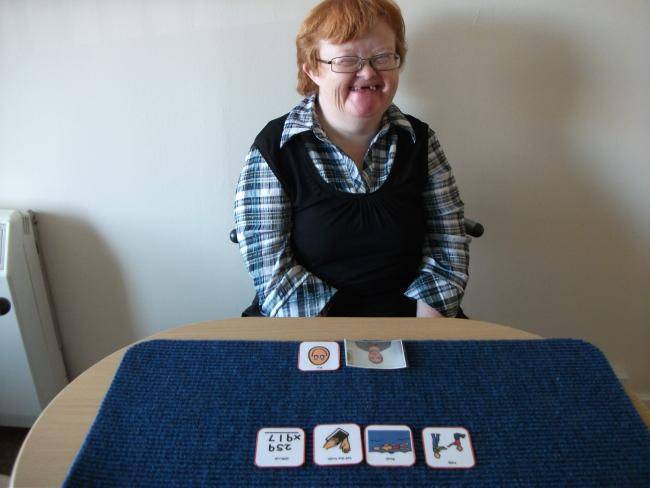 The Scottish Social Services Council (SSSC) is responsible for registering people who work in social services, promoting their education and training and undertaking workforce planning and development.

In 2008 SSSC, in partnership with IRISS produced the Continuous Learning Framework (CLF), which aims to improve outcomes for people supported by social services by helping the workforce supporting them to be the best they can be.

Purpose of the project

The purpose of the project between the SSSC and St Joseph's was to explore methods of securing feedback, about the qualities and capabilities of individual staff, from those supported by St Joseph's services.

The starting premise for this project was the recognition that people who are supported by services learn a lot about their workers through having daily contact, and are able to make judgments about the quality of this contact and support.

The skills involved in delivering quality relationships and support are the crucial elements that inform the CLF, but often those supported by services may say things like 'you've been there for me' or 'you listen to me', rather than think or use terms to be found in the CLF personal capabilities, such as 'empathy' or 'resilience'.

St Joseph's contacted the SSSC because they were interested in using the CLF to enable people they support to play a leading role in changing service delivery. They had recently experienced a retendering process in which six services had been commissioned with other providers and recognised a need to re-orientate their services by putting user involvement and participation at the heart of service development.

This involved CLF awareness sessions with people who use the service and in particular members of the Charter Group. This group was already part of the National Involvement Network and had done work on evaluating the service as a whole. After some awareness raising and discussion with senior management a commitment to ask for volunteers from people who had housing support was made.

The first stage involved 12 people who were supported by St Joseph's attending a half-day session at Dundee in summer 2011. Two people from SSSC facilitated the process, the support staff from St Josephs were not involved during the day to ensure that the participants could feel free to comment fully.

The session involved the use of Talking Mats, which is a simple tool for helping people to think about issues in their lives, explore these in more detail and express themselves in a visual medium (with little physical or verbal demands). The mats offer a range of symbols and options, such as 'No', 'Yes' and 'Don't know'. Each person was provided with a mat, with the symbols made bigger for those who were visually impaired (see also Talking Mats and reviews case study). 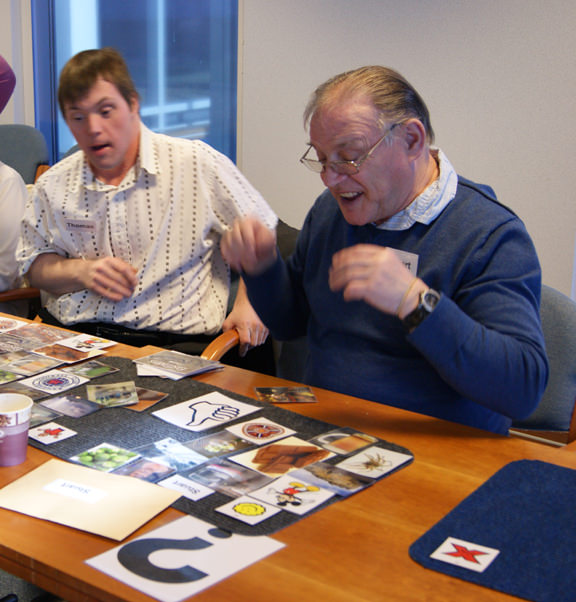 The session began with an ice breaker which asked people to indicate whether they liked things, such as sprouts. The icebreaker established that all those attending the session were able to use the mat to convey what they thought.

Following the icebreaker, people were provided with pictures of the staff at St Joseph's. This included the gardener, manager, team leaders and direct workers. At this stage the individuals' key workers and coordinating staff were not included, but kept in a sealed envelope. This was intended to ensure that attention was paid to other staff, not just the key workers.

A range of exercises were then undertaken where people were asked to pick out the photos of staff for the following questions:

The exercises focused on the positive, looking at which staff they valued for specific reasons.

The last exercise consisted of telling people they had won a hot air balloon trip and would have four workers with them. Once they had selected those they wanted to include the envelope was opened which contained up to three people; significant staff and their key worker(s). To include any of these staff in their balloon they had to exclude the same number from those previously chosen. All those doing this exercise felt that the four people they finally identified to accompany them in the hot air balloon represented the four people who best supported them.

Following this initial session, the next step was to explore why the participants had chosen certain staff, and to tease out what qualities these people had which were particularly valued. At this stage there was a desire to explore whether different qualities (and therefore different staff) are preferred for different tasks.

A member of staff from SSSC talked to three people, two of whom lived in their own house and one lived in a shared house. To test out this approach we included a mixture of participants involved in the process, for example one of the participants was a woman who communicated by signing. The facilitator arranged to see all the participants within their homes and as in the first stage again used a Talking Mat to explore issues.

Three exercises were undertaken to;

These exercises involved the photos of the four staff the participants had previously identified they wanted in the hot air balloon and icon based symbols.

Firstly people looked at each of the individuals and were asked how they felt about different symbolized emotional feelings i.e. feeling safe, confident or being listened to. Each symbol was placed on the mat by the person responding to each symbol in turn.

People were then presented with scenarios and asked to weigh up who they would want to support them at this specific event. The first scenario involved the participants feeling ill. Participants were shown photos of the staff and asked would you like this person with you? They could put the staff in three categories: "yes", "no" or "don't know".

The second scenario focused on a more enabling support. In this scenario the participants have a difficult choice to make and are asked to identify which staff they want to help them. These two scenarios link directly with CLF personal capabilities such as a focus on people who use services and their carers, flexibility, empathy and confidence.

The final exercise at stage two was an outcomes exercise. Here participants were asked to identify what outcomes they would like in terms of how people could support them. Participants were presented with a similar selection of symbols as used in the first exercise such as, 'being told the truth' and 'being treated as an equal'. These options were then individually placed on the Talking Mat. They were then asked to rank the importance of these outcomes by selecting the most essential four of the ones they had put in the 'Yes' area of the mat.

The process helped to highlight some issues around the people in the participants' lives. For instance, at stage one, one male participant chose four men to be in the balloon and it transpired that he didn't feel he had enough men in his life to do activities like going to the pub. It also helped to raise questions about the appropriateness or quality of support, for instance one person didn't include one of their key workers in their balloon.

We looked at the results from all of those taking part and noticed a few patterns. For instance, at stage one, a member of staff who wasn't a key worker was chosen to go in the hot air balloon by four separate people. By the time this information was fed back they had left the organisation, which perhaps helps to illustrate the importance of providing this sort of feedback to help show staff that they are valued.

The scenario exercises undertaken at stage two demonstrated that there are methods which can be used to establish the qualities of staff. Some of the staff chosen to support participants when they were ill were different from those chosen when they had a difficult decision to be made. One staff member was chosen for both scenarios evidencing their CLF capabilities around flexibility and empathy. All the staff are clearly highly valued but now they had more specific feedback about areas that were individual strengths but also others that could be developed. All this feedback could be aligned with capabilities in the CLF, allowing individual staff to establish where they are within the framework but also giving a structure and direction to improvement in practice

The outcome exercise is a useful way to find out what people are looking for in terms of the approach, form of support or qualities of staff, allowing them to focus their development of behaviours and qualities more appropriately. Progression is easily measurable, by going back and asking people how individual staff are doing in terms of the outcomes they identified as important.

The exercises also clearly highlighted that people with learning difficulties know who they want to have around them and can quite clearly choose between staff if they have the opportunity to choose. Furthermore, it is worth noting that people were energised by the experience and appeared to enjoy the process. In follow up sessions there were many positive recollections about the day in Dundee

One of the most significant impacts of this work has been in recruitment. The organisation now bases its interview decisions on a dialogue between the applicant and a person who uses the service. This reflects a fundamental shift towards actually putting people who use services at the heart of the process.

The external recognition of this level of participation was noted by local authority commissioners in their recent decision to return all the previously removed services back to St Josephs.

This work highlighted the need to recognise that people supported by services are most appropriately placed to provide feedback on staff performance and development. One of the tools that would support this process with some people would be the use of Talking Mats. The feedback generated through such a process aligns with the CLF, providing a platform for the development of positive behaviours and people skills.

Work is underway around improving the accessibility and understanding of the CLF for both staff and people who use services As a result SSSC will shortly be producing digital recordings to demonstrate different qualities of staff which can be used as pointers to explore and illustrate concepts such as empathy. The accessibility of the CLF is increasingly important because the expansion of self-directed support creates a situation whereby those who have control over support budgets are increasingly likely to be responsible for the recruitment and development of their own staff.

Finally, the products of these exercises in the form of videos Tom and Ian using a Talking Mat and pictures have proved to be a very inspirational message throughout the sector.

For further information contact the CLF team at: CLF.enquiries@sssc.uk.com