Spirituality and ageing: implications for the care and support of older people

It is predicted that by 2033 there will be a 50% increase in the number of people over 60 in Scotland. This is accompanied by increasing longevity. Living longer brings with it possibilities of enhanced health, happiness and productivity but also increasing frailty, chronic illness and diseases of older age such as dementias, diabetes and heart disease. Scottish health and social care services spend more time and money on this sector of the population than any other (Scottish Government, 2010a). Social and health care policy documents specify person-centred compassionate and dignified care (NHS Education for Scotland, 2011), yet, examples of poor care of older people continue to emerge. Focusing on the spiritual care of older people is one of the ways in which person-centred care can be achieved (Coleman, 2011; Nolan, 2012).

Spirituality is a problematic, disputed and evolving concept. There are two extremes to the definition of spirituality; both approaches acknowledge a search for meaning. For some people, divine presence is central; for others, spirituality is a secular concept involving inner life, personal belief and focussing on self. Five ways of thinking about spirituality include:

Spirituality as separate from religion

Paley (2006) notes that it is only recently that spirituality has become separated from religion. He suggests that the growing interest in spirituality amongst nurses is part of the professionalisation of nursing and a 'claim to jurisdiction over a newly invented sphere of work' (p175) that can be seen as part of nursing practice. Nolan (2011), writing as a nurse and healthcare chaplain, has pointed out that there is at the same time a decline in religion and an increase in interest in spirituality. Taylor (2007) offers a detailed account of the rise of the secular age and its implications for society. He traces the change from 'a society in which it was virtually impossible not to believe in God, to one in which faith, even for the staunchest believer, is one human possibility among others' (p3). Heelas and Woodhead (2005) noted the 'massive subjective turn of modern culture' (p2). The turn is away from the focus on life lived as one of God's creatures to life lived subjectively. Based on these accounts, Nolan (2011) suggests that spirituality has become uncoupled from religion.

There are a variety of health and social care policy drivers for incorporating spiritual care into practice.

Spiritual care is usually given in one-to-one relationship, is completely person centred and makes no assumptions about personal conviction or life orientation.

Religious care is given in the context of shared religious beliefs, values, liturgies and lifestyle of a faith community.

'You do not have to alter your values and beliefs in order to receive a service. The principle of valuing diversity means that you are accepted and valued for who you are. The legislation which outlaws discrimination has influenced all the care standards, and the standards in this section make it clear that you can continue to live your life in keeping with your own social, cultural or religious beliefs or faith when you are in the care home.' (Care Inspectorate, The National Care Standards 2007: Standard 12)

Meeting the end of life care needs of residents which 'should take into consideration their cultural, spiritual and religious needs and other life circumstances'. (Scottish Government, Living and Dying Well, 2008: Action 15)

'Non-discrimination and equality, including rights to be free from discrimination-based age, disability, gender, race, sexual orientation, religious beliefs, social or other status.'

The strategy has a strong focus on 'person-centred care' which incorporates the spiritual element which has been the focus of statements from the World Health Organisation. (Scottish Government, Scotland's National Dementia Strategy, 2010b)

'Health professions have largely followed a medical model which seeks to treat patients by focussing on medicines and surgery and gives less importance to beliefs and to faith. This reductionist or mechanistic view of patients as being only a material body is no longer satisfactory. Patients and physicians have begun to realise the value of elements such as faith, hope and compassion in the healing process. The value of such 'spiritual elements in health and quality of life has led to research in this field in an attempt to move towards a more holistic view of health that includes a non-material dimension, emphasising the seamless connections between mind and body'.

(WHO, Consultation on Spirituality, Religion and Personal Beliefs, 1998)

The links between person-centred care, dignity and spiritual care

Person-centred care is currently the preferred method of providing care 'that is responsive to individual personal preferences, needs and values and assuring that patient values guide all clinical decisions' (NHS Scotland, 2010: p22). Alongside this strategy is the concept of dignity, developed as a response to poor care (for instance see A Dignified Revolution (ADR)). The Codes of Practice for Social Services Workers identify the importance of respect, trust and upholding confidence (Scottish Social Services Council, 2009). The idea of dignity therapy for older and dying patients developed by Chochinov and colleagues (2005) and Hall and colleagues (2009) is linked to spiritual care. These different discourses point towards the same theme, that the inner person and their values should be the starting point for caring practice. 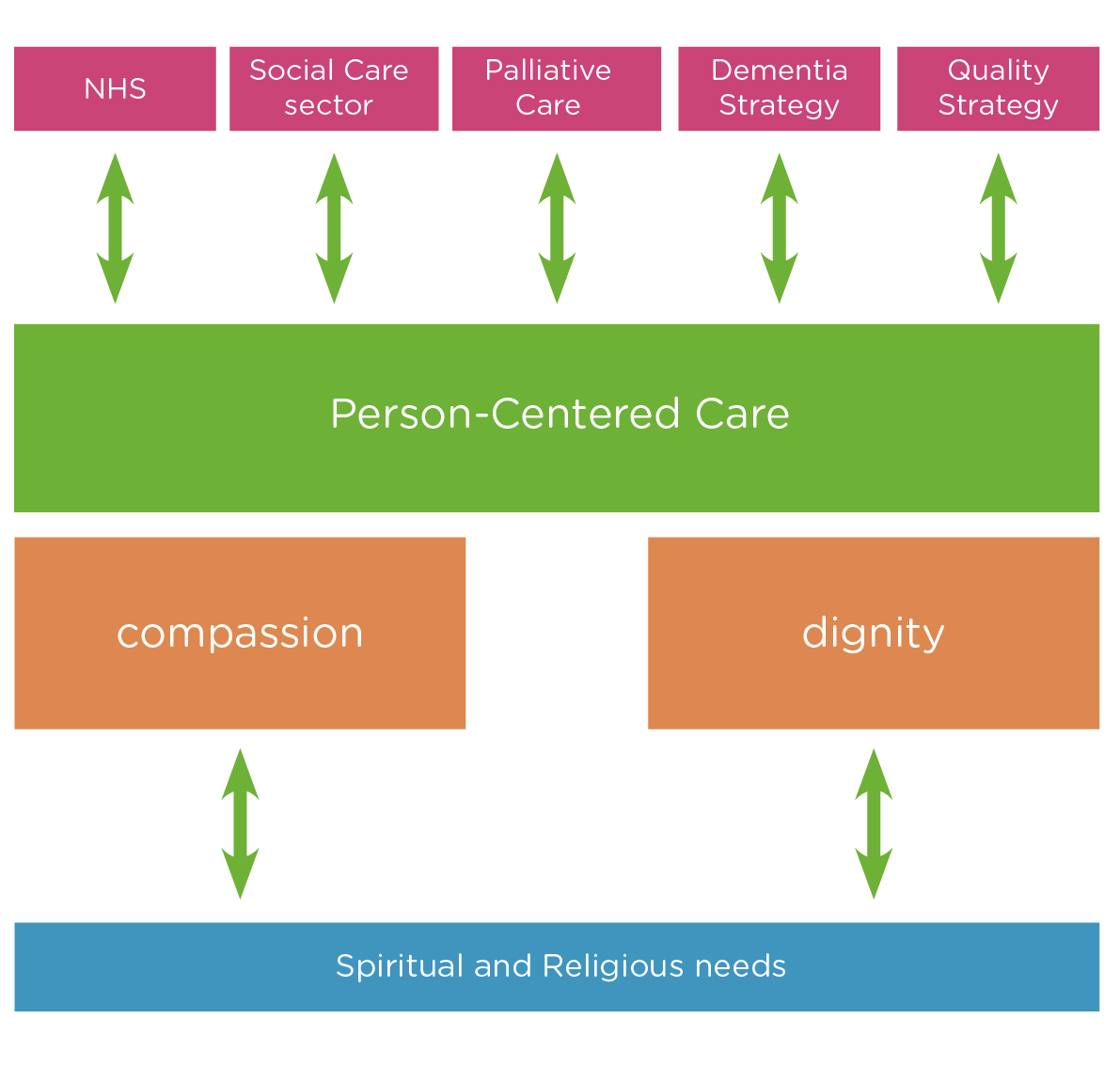 The theoretical basis for research on spirituality and ageing

The research about spirituality, health and ageing

Empirical research into spirituality, health and ageing is dominated by discussions about measurement and method associated with the complications over definition. The early work comes from the United States. There is a much stronger connection in the US between spirituality and religion and so the research tends to focus on the effect of religious practice and belief on health. Observable religious practice is obviously easier to research than 'spirituality'.

Vandeecreek (1995) has gathered key quantitative studies that relate to the work of the health care chaplain as professional spiritual care giver. This specifically excluded qualitative and theory building work. Byrd (1988) conducted a randomised controlled trial investigating the power of intercessory prayer to patients admitted to the Coronary Care Unit in a US hospital. Three hundred and ninety three patients were randomised to an intercessory prayer group or to a control group. While in hospital, the experimental group were prayed for by a group of Christians specifically designated for the task. The control patients (those not prayed for specifically) required ventilation assistance, antibiotics and diuretics more frequently than patients in the prayer group. The conclusion was that prayer has a beneficial affect on patients admitted to a CCU. However, Benson et al (2006) found that prayer does not work in a medical context and further indicates that it can be harmful for some patients.

Distillation of research evidence from over 1,200 empirical studies and 400 reviews by Koenig and colleagues (1994; 2001) has shown an association between faith and religious practice and health benefits, including protection from illness, coping with illness and faster recovery. Koenig (1994) identified 14 spiritual needs of older people based on prior research both at a theoretical and empirical level. Koenig here is specifically talking about religion and the various practices that emerge from participation in religion. He has done no work on the more generic understandings of spirituality that are highlighted earlier. This distinction is important as the word 'spirituality' is multi-vocal and is required to be used with clarity and caution if an argument is to be made for its use. However, this list below does provide a starting point as many of the concepts are understandable in a non-religious context.

The practice of spiritual care for older people

The practice of spiritual care with older people is less contentious than the definitions of spirituality. There is a growing shared understanding that 'meaning making' and 'life review' are important spiritual processes which can manifest themselves in a variety of ways. Some of the activities to support spiritual care are explored below.

Talking about previous religious and spiritual events gives both carers and older people a chance to review spiritual needs and develop new friendships with, and knowledge of, each other. Mackinlay and Trevitt (2010) allocated 113 people with dementia to groups for periods between six weeks and six months. Qualitative and quantitative data was collected which showed that life story work with an emphasis on spirituality helped develop stronger relationships between staff and residents and allowed for discussions about meaning to take place.

Spiritual history taking involves asking about the importance of faith and beliefs to the person. Pulchalski's (2006) model was developed for physicians in the USA. It focuses on asking about faith, the importance of faith to the patient, the community of the patient and the action, if any, that the patient would like regarding their faith in their current context. Pulchalski (2006) found that this trigger discussion can be referred to later as the patient becomes less well and signposts future caring practice. Atchley (2009:160) offers a spirituality inventory.

Birren and Schroots (2006) researched the value of life review and set up the Guided Autobiographical Group (GAB). His findings showed that GAB provided increased sense of personal power and importance and enhanced adaptive capacities, drawing on forgotten or dormant skills. This allowed people to face end of life matters with confidence.

The TSAO foundation for successful ageing in Singapore suggested that there are three stages to GAB:

The positive effects of music and singing on wellbeing are noted in Lipe's (2002) review. Robertson-Gillam (2008) carried out a pilot study to test the potential for choir work to reduce depression and increase quality of life in people with dementia, and to look at the extent to which it met their spiritual needs. Twenty nine participants were assigned to one of three groups: choir, reminiscence and control. Results indicated increased levels of motivation and engagement. Learning the lyrics evoked long-term memory with religious and spiritual meanings for choir members. Both the choir and the reminiscence group showed improved levels of purpose and wellbeing using the Spirituality Index of Wellbeing (Daaleman and Frey, 2004).

Providing continuity for older people in terms of their familiar rituals and routines sustains memory and wellbeing. Atchley's (2009) longitudinal study of 1300 people over 20 years from 1975 showed that continuity of activities occurred most commonly for reading, being with friends, being with family, attending church and gardening. Goldsmith (2004) identifies the importance of continuity of worship and using familiar signs and symbols as part of that, as well as the capacity to create forms of worship that tap into spiritual memory.

The reflective self as a presence for others helps the spiritual journeys of others. Kelly (2012) discusses the use of the person themself as the resource by which spiritual care can be delivered. This follows on from Speck's (1988) work which shows that the calm and unpressured presence of the chaplain can provide support in times of difficulty and when in search for meaning.

Careful listening is a spiritual practice. Recent research into community chaplaincy listening (Mowat et al, 2012) shows that in intentionally listening to another, the gift of time and attention is offered, as well as support for the spiritual work of hope, meaning and purpose.

The ageing population requires person-centred care and developmental support in order to maximise its chances of ageing well. Spirituality, although a contested concept, is evolving and developing and can be defined as a search for meaning with or without religious adherence. Person-centred care involves spiritual care - the time, attention and listening to support individuals to find meaning and purpose in their lives. It has been established that there are a range of activities and practices which can support these dimensions of spiritual care.

This Insight was written by Harriet Mowat and Maureen O'Neill (Faith in Older People) and has been reviewed by Elizabeth MacKinlay (Charles Sturt University), Neil Macleod (SSSC), John Swinton (University of Aberdeen) and Gordon Watt (Scottish Government). Iriss is very grateful to them for their input.

Find out more about downloading and reading our publications in digital formats.