Autism – telling a story through video

Liam Robertson is 20 years old and has autism. He has a passion for film, attends Scottish Youth Theatre, works part-time in a Barnardo's shop in Glasgow and would like to pursue a career in the theatre.

Iriss helped Liam create a video CV in order to demonstrate how someone with autism might better present their skills. We also interviewed Liam's parents about the support they had received from the education authority, social services and health boards, as well as their aspirations for Liam.

Liam's social worker agreed to be interviewed about why he believes in the power of video and why it is important to centre social services on the needs of the person rather than making the person fit the services on offer.

How it came about

David Lettice, Liam's social worker, was already aware of the power of video to help people with a disability make their case. He felt that Liam's skills and passion for the theatre might be more powerfully portrayed if he told his story on video and so he approached Iriss to to find out if we could help. As it happens we had been using video and still photography for several years as part of our programme to share and use knowledge and experience.

So we were happy help create a video CV for Liam, provided we could also capture the story from the perspectives of Liam's parents and David, the social worker.We felt that the whole story would have resonance for anyone working in social services as well as other agencies and employers.

We - the Iriss multimedia team - arranged a meeting with Liam, his parents and social workers to explain the process and listen to any concerns. We also brought in a freelance director who had experience not only of working with young people but also of working in professional film and theatre.

We wanted to be clear that the resulting video would be publicly available on the internet where it could be used for educational purposes. Liam talked to us about his work with Barnardo's shop and Cosgrove Care, the classes he attended at Scottish Youth Theatre and Indepen-dance as well as his interest in film and theatre. We used this information to plan a schedule for shooting at various locations. Liam's parents were happy to have some of the story filmed in their home and we decided to approach Barnardo's, Cosgrove Care and SYT as possible locations.

We gave the shooting plan to Liam and indicated what he might like to talk about at each location. For example, we asked him to draft a script for filming in his bedroom in which he would talk about his interest in film, his storyboards and how he uses Facebook to keep in touch with friends. Similarly with Cosgrove Care, Barnardo's, IndepenDance and Scottish Youth Theatre: we asked Liam to draft a few sentences on each explaining in his own words his connection and experience. 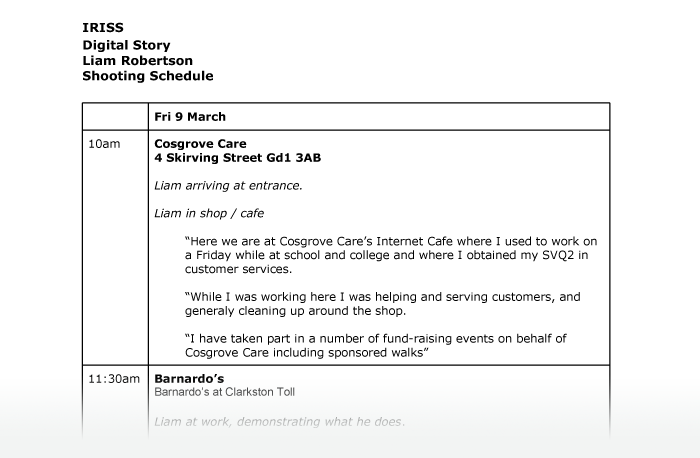 We then had a set of four locations and a script for each.

Cosgrove Care, Barnardo's and Scottish Youth Theatre were all delighted to help and allowed us access for filming. We decided that it would be best to film on two separate half-days, mainly because we suspected that Liam might find the process quite tiring. Having agreed the dates we then went on location. Indepen-dance were also very supportive, but their premises were under repair and not suitable for filming.

Given Liam's chosen career (film or theatre) the process of filming was as important as the film itself. For example we explained the need to shoot the same scene from different angles so that the resulting film could cut to different shots to make it more visually interesting. We were also able to demonstrate to Liam the common practice of filming out of sequence.

On location the crew work together to decide on the technical and creative approach. Much of this has to be done on the day, taking account of weather and extraneous sounds, such as delivery vehicles. It's the job of the Sound Operator to check for extraneous sounds. The Director coaches the subject (in this case Liam) to make sure he knows what is happening and why we shoot scenes more than once and from different angles. She also agrees with the Camera Operator what shots and angles to try. The Producer co-ordinates the whole process, arranging access to locations, transport, scheduling and legal matters, such as consent forms.

The footage was edited using Apple Final Cut Pro and a first cut uploaded to Vimeo for Liam's approval before being copied to DVD and published on the IRISS website.

Editing is a skilled task which involves making sure that the final cut has pace, tells the story and engages the viewer.

Hosting video on your own website can create technical and administrative overheads. For that reason we use a video hosting service, Vimeo, which is very reasonably priced (approx £60/year) and handles technical matters like file formats and embedding/sharing. This keeps our maintenance overheads very low.

Vimeo provides us with viewer statistics, such as total plays and total finishes.

For Liam the process has been instructive and helped him learn more about his chosen career. More generally we think that his story will be instructive for others.

Since making the DVD Liam has been accepted for the acting and performance course at Stow College in Glasgow.

If you have a story you'd like to share, either on video or audio, please drop us a message

To make you own digital story, we have produced some guidelines

We would like to thank the following for their generous assistance in making this video story: