In 2016/17, Iriss worked with the Glen Isla project, a women’s criminal justice centre based in Arbroath, to enhance relational approaches. This is the story behind the development of Buddy: a support tool.

Get Buddy: a support tool

Download a copy of Buddy or order print version.

The aim of the project was to co-design a relational tool to enhance communication and relationships in a women’s criminal justice setting. We felt that a tool had the potential to change interactions across social services:

The use of tools in social service interactions can better support practitioners, reveal and reflect that which is unsaid, as well as the values, attitudes, constraints and assets practitioners bring to interactions. 1

The focus on relationships was sparked by evidence from an evaluation of 14 women’s criminal justice centres (WCJS), which identified that centres, such as Glen Isla, offered the opportunity ‘to connect with workers and other women in a way that many had not experienced in previous services or through supervision alone’. 2 These services are unique as they are designed to offer space for women to develop relationships that support and enable them to achieve their outcomes. The evaluation further emphasised that women ‘develop self-worth through their relationships with others and are motivated by their connections with other people’ 3, leading to improvements in their personal outcomes. We were interested in exploring relational approaches in a complex setting which relied on relationships to achieve outcomes.

Following contact with a shortlist of women’s criminal justice centres in Scotland, we chose to work with the Glen Isla project in Arbroath because of their approach to relationships and their appetite to undertake project work. 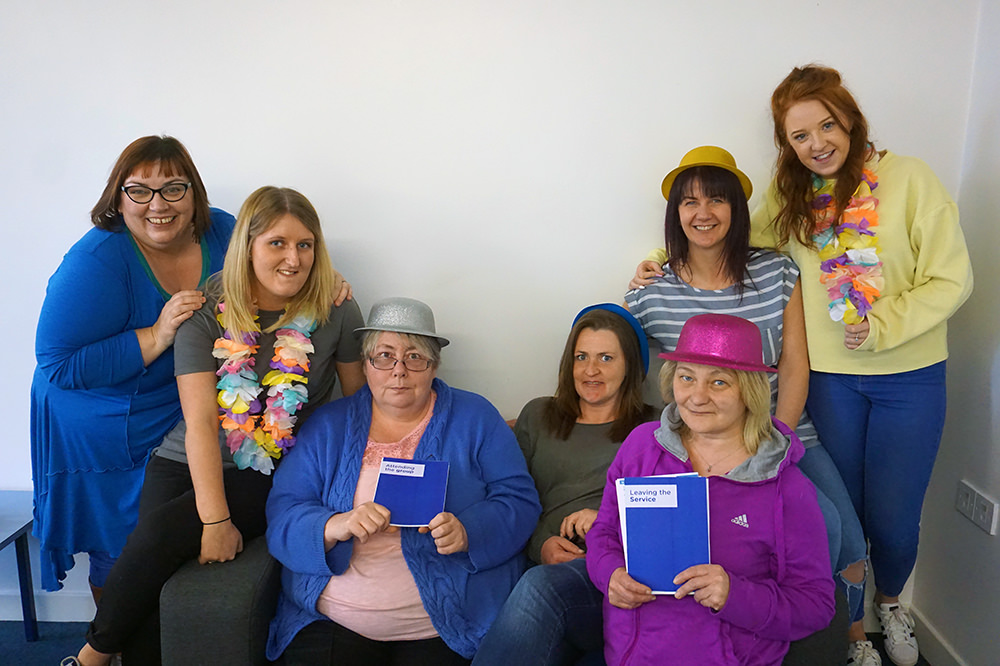 The Glen Isla Project supports and supervises women who are subject to court orders or returning to the community following a custodial sentence or period of remand. Currently, the team comprises a team manager, a deputy manager, two social workers, a resource worker and a clerical staff member. The outreach nurse post is vacant.

In terms of service delivery, the project engages with professionals from a range of services including the NHS; Sheriffs; Procurator Fiscals and court staff; the Police; drug and alcohol support services; community mental health services; children and families social work; and other third sector agencies. The team carry out supervision of orders, outreach, one-to-one support and group work. Members of the team also represent the service on a number of working groups. The Glen Isla project takes a flexible, relational approach to the work they do with women.

The project used a mix of ethnography and co-design over a very short period of time to reach its objectives.

This stage culminated in a sensemaking session where we described our findings to women and staff and requested feedback. More information about our findings from this phase is available below.

We facilitated three workshops over three weeks to co-design a tool to support relationships, focusing on the issue of new beginnings. The co-design sessions were designed to be a blend of individual work, mini group work and broader group discussion. We worked closely with a group of seven women and three practitioners throughout the phase.

We returned to the Glen Isla service with a prototype of the tool and tested it with the women and practitioners, using the personas they had previously designed.

What we learned about relationships

Two Iriss staff members were able to gather ethnographic observations over a period of nine days in December 2016. At the end of each day of observation we synthesised notes and developed a series of insights based on the evidence of what we had seen. The insights were as follows:

This list does not capture all of the findings, particularly the depth of feeling that women and workers had towards each other. Staff felt a sense of connection and responsibility for the women, which had an impact on them, particularly when the women made choices that put them at risk.

She knew I was there… I kept her going as long as I could, physically, practically, emotionally. Staff member interview

We were also struck by the support and camaraderie that the women drew from each other, particularly in group settings.

All the women in the group are sort of there for each other like…. A couple of weeks ago, I was sort of upset in the group and they were all like ‘are you ok?’ and made you feel ok. A woman discussing their experience of group support

We also noted that the world outside of the centre often seeped in. The women knew each other through a series of complex interpersonal webs and had online and in-person relationships that had the potential to be uplifting or destructive.

Many women expressed a desire to support and help each other by sharing their wisdom. This was a key motivation for the development of the Buddy tool.

The interest in this subject may have been due to recent staff departures which had had a serious impact on the women and their relationships within the service. However, we felt that the staff at the centre were aware of the impact of ending relationships without handovers, but it had been largely outwith their control.

We also noted that there were already lots of resources on good endings in social work practice, and so felt that we would not be able to contribute new learning on the subject. It is important to note that throughout the project, despite our chosen focus, the women repeatedly returned to this topic, which perhaps, suggested that it was unresolved for them.

The beginnings of relationships

Our observations revealed that established relationships could weather conflict, change in circumstances and could contribute to positive outcomes - but the getting there was the challenge. Women and their experience of new beginnings within the criminal justice system was a concern raised in previous research. Throughout the course of the workshops, women highlighted that they would have appreciated hearing from other women about their experience of the service before they started, and want to help other women with their new beginnings. This led us to build the Buddy tool.

How we ran the co-design sessions

The co-design sessions were designed to be a blend of individual work, small group work and broader group discussion. In the first session, we identified key stages of new beginnings. In the second, we identified potential ideas to address these, and in the third session, we refined ideas. However, the majority of the tool design took place after these workshops, based on the ideas and concerns of the group. Our learning from this project is to:

Invest in the dynamic

In our first session, the interactions between women accessing the service was challenging. This was because of unresolved issues between the women, stemming back to an incident that had taken place months earlier. This deeply affected the focus of the group and their ability to work to task. At the end of the session, this conflict came to a head. Facilitators responded by making sure no women left the group in the midst of the conflict, prompting responses and resolution and then asking the women to express gratitude to each other. The tension never reached the same level in future sessions, but needed ongoing attention, including referring back to the working together agreement.

Use a blend of written tools and conversational activities

In any group, individuals have different skills, so we tried as much as possible to design workshops where people could write, be creative and discuss. We noticed that creative exercises (like collages and personas) were well received. However, at times, the more challenging tools that required structured feedback and writing were not always engaging for the full group. On reflection, the group might have benefited from alternative exercises that achieved the same outcome if they were struggling working with written tools.

Always refer back to the task at hand

There were times in the workshops where we lost focus. This was, in part, because the women had a breadth of personal experience that they wanted to share. It was also because there were unresolved issues that had been unearthed in the ethnographic stage (for example, staff leaving abruptly). We tried to continually assert the focus of the sessions, but could have been clearer in doing so throughout.

We completed the workshops with a celebration of achievements, which included gifts and formal certificates which recognised their contribution. This was based on our observations of the sense of pride they took from completing tasks.

In retrospect, we wish that we had been able to have more stable staff involvement in the project. However, given the nature of the service and demands on staff, we recognised that this was simply not possible.

Evaluation of the workshops

Some women felt disappointed that we were not focusing on the issue of staff turnover.

For some women, there was a demand for literacy and reading and writing which presented a barrier:

I feel a little bit distanced cos of all the paperwork, you know what I mean?

However, the women also felt ownership of their experience, and pride that they would be able to contribute to an improved experience for other women in the future:

I like the sense of validation… this is our group even though we were made to come here at the beginning as part of a [sentence].. It’s our group and our thoughts and opinions matter.

The staff felt that they had the opportunity to hear the women express ideas and opinions:

One of the things I’m impressed with time and time again is the amount of ideas, good thinking that the women have.

There was also a comment about clarity and confusion, which was a challenge particularly for the women who could not attend all three workshops in their entirety:

I was confused at the start which made me not understand it all.

I think they were both very helpful, truthful and learned us a lot and also how to solve tension. I will miss them.

The women said that the tool drew on their own unique expertise, which they saw as different to the practitioner expertise.

You’ve got more information on that subject than what staff would ever have.

Women also felt that being a supporter could be a really rewarding experience, and make you reflect on your own journey and what it might mean to give back to others. However, the group noted that you would have to be ‘really ready’ in order to take on the responsibility of supporting someone else.

The women said that the tool had the potential to help women who are new to the criminal justice system feel ‘less lonely’.

The women compared this tool with forms and assessments in other settings (such as mental health), which were long in comparison to the Buddy tool, and not as conversational. The women liked that you could pick and choose which parts of the Buddy tool to use. The group also discussed who else could benefit from the Buddy tool: school children, community mental health, any workplace.

The group also suggested changes to the tool during this prototyping process, and made insightful suggestions about the role of the supporter and the importance of having a safety net. This discussion is reflected in the tool.

Reflections from the project team

We were personally struck by the honesty of the staff and women throughout the course of the project. Not only did they allow us to observe intimate conversations, but they were able to open up about their own experiences of relationships within the service, and build a better experience for other women. We were overwhelmed by how warmly we were welcomed by the co-design team.

We would like to thank the Glen Isla project for welcoming us into a very busy and complex environment, and for taking the time to help us find our feet.

The group’s other ideas