The wellbeing web
By Ellen Daly
Published on 2 Mar 2012

What is the wellbeing web?

Outcomes refer to the impact of support on a person's life and not the outputs of services. Outcomes are the answer to the question: So what difference does it make? Outcomes are the changes or benefits for individuals who access support.

The council wanted to develop a simple, visual tool which would be flexible enough to be used in a variety of settings with a range of people. It was also essential that the tool be relevant and compliant with the Getting it right for every child national practice model (Scottish Government, 2008). The process the council went through to develop the wellbeing web was informed by evidence in several key ways. It built upon evidence from action research, from existing models for capturing outcomes and most significantly, from the feedback of children, parents and practitioners.

The development of the wellbeing web capitalises on the evidence from the Angus Learning Partnership for children affected by parental substance misuse, an action research project otherwise known as the Link-Up initiative. Link-Up was a multi-agency initiative which aimed to identify, support and protect children affected by parental substance misuse and change the way services - particularly those involved with adults - work with children and families. What characterised Link-Up was the promotion of the willingness to work 'differently' across the boundaries of partner organisations.

The initiative was based on principles of early intervention and the Getting it right for every child approach. Getting it right is a national programme that aims to improve outcomes for all children and young people in Scotland. It seeks to do this by providing a framework for all services and agencies working with children and families to deliver a co-ordinated approach which is appropriate, proportionate and timely. The Getting it right model includes eight wellbeing indicators. These represent key areas where children and young people need to progress to do well now and in the future. The indicators are: safe, healthy, active, nurtured, achieving, respected, responsible and included (remembered by the acronym SHANARRI). The indicators can be used to structure the information recorded about a child or young person and to monitor their progress.

The wellbeing web is based on The Outcomes Star, developed, trademaked and copyrighted by Triangle Consulting (see for conditions of use and licensing arrangements). The Outcomes Star was developed to support and measure progress of people experiencing a range of issues including homelessness, mental health problems and substance misuse. Each Outcomes Star is shaped by concepts at each point. These can be tailored to the focus of the work being done with the individual. Each concept has a related scale. Individuals and workers complete a star together by rating how the individual feels about where they are on the scale for each concept. This can be repeated at intervals to chart changes over time.

The eight Getting it right wellbeing indicators provide the key context for the wellbeing web and the focus of work with both children and parents. Those developing the web felt that there was real value in having one model for both children and parents and that the wellbeing indicator areas were equally relevant regardless of age. Given that parents play in a key role in supporting positive outcomes for their children, it was also felt that having a shared model would promote parents' understanding of work being done with their children and familiarity with the areas of wellbeing defined in Getting it right. 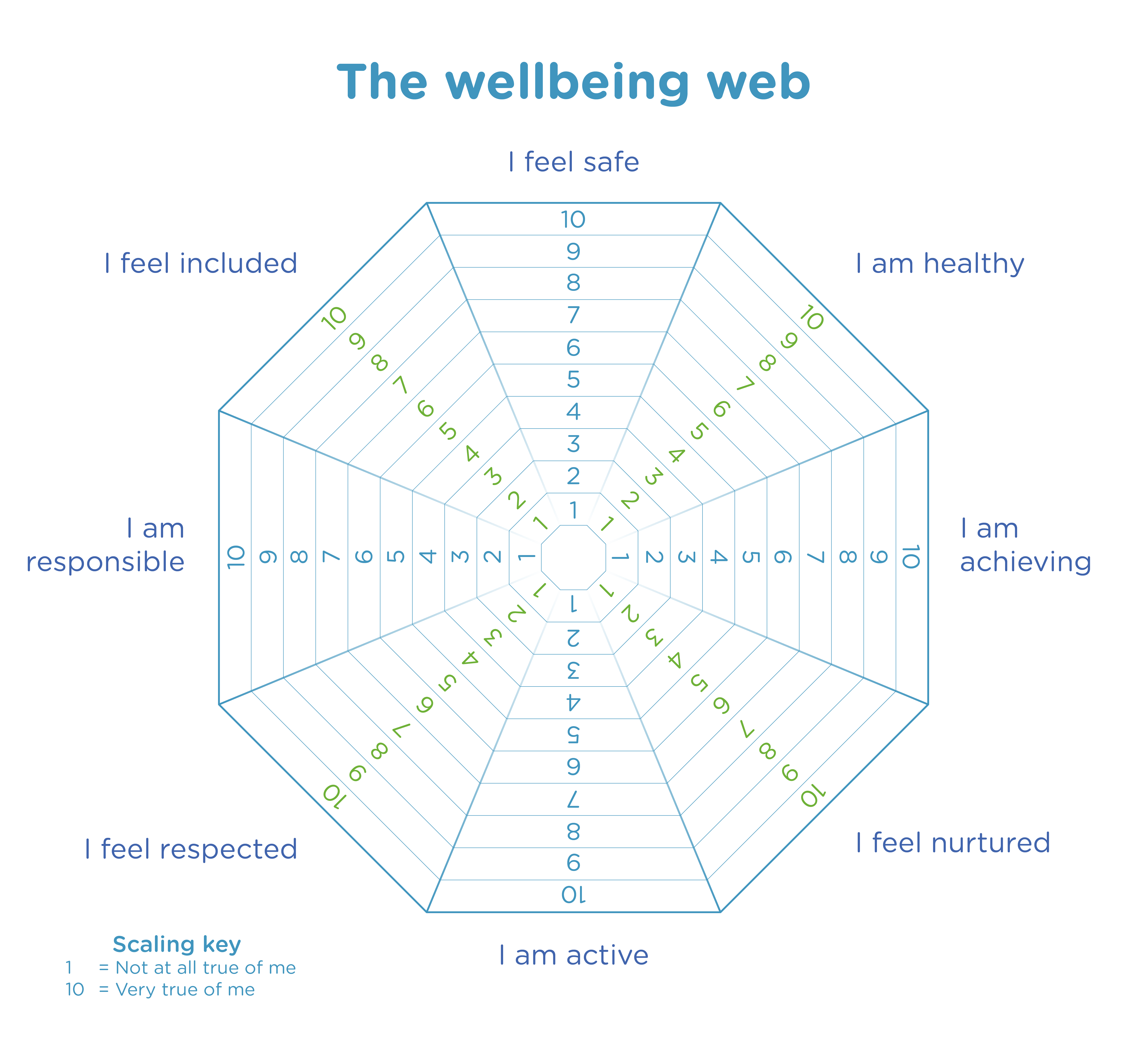 How is the wellbeing web used?

The wellbeing web follows the same principle as the outcomes star. Practitioners work with either a child or a parent to rate how they feel about the eight areas of wellbeing. This exercise can be repeated again at a later time to chart any changes. This helps visualise how children and parents are feeling but can also be used as a tool to reflect on progress over time as their scores on the wellbeing web change. The wellbeing web is accompanied by prompt cards, which seek to break down the eight, broad wellbeing indicators into tangible concepts relevant to children and parents. The prompts were developed in partnership with children, parents, practitioners, members of the Alcohol and Drugs and Child Protection committee sub-group and child psychologists.

Information from the web is contextualised by the worker and recorded within the child's (and/or adult's) plan. Being able to see progress can help motivation and can support a conversation with the professional concerned if progress has slowed or children /parents are struggling. The tool fulfills another purpose in that information collected from the web also supports performance management by highlighting effective intervention, targeting unmet need and informing care planning, inclusion and decision-making.

The web was piloted and feedback was gathered to inform the development of the tool. Ten children between the ages of 4 and 16 piloted the web. Their feedback was overwhelmingly positive and they reported enjoying working through the web with practitioners. Piloting was also conducted with parents affected by substance misuse. Again, feedback was very positive. Practitioners also enjoyed using the wellbeing web with children and parents, finding that the tool supported positive engagement and acted as a focus for conversations. An example of a practitioner's experience of using the web can be found below. Practitioners also felt they would benefit from a guide to using the tool. In response to this, a protocol for the wellbeing web was drawn up.

A key driver behind the development of the wellbeing web was the leadership of the Alcohol and Drug Partnership and Child Protection Committee sub-group. This group comprised a group of staff from all levels including front-line practitioners and managers. The role of this group was crucial in taking forward the knowledge from the Link-Up initiative and creating opportunities for practitioners to trial a new tool to identify and record outcomes. Another important enabler was the enthusiasm and commitment of the sub-group and practitioners to improving outcomes for children and families affected by parental substance misuse. Barriers to the project included the time needed to pilot the tool and to collate the outcomes information gathered.

Based on the success of the pilot, the council now plans to implement the wellbeing web across the rest of children and families services as part of the Getting it right roll out.

A practitioner's experience of using the wellbeing web

"I am currently working with a family where the issues have been quite apparent, but the parent does not accept issues which were highlighted at the child protection conference review. These issues focus around the mother's household management and cleanliness of the home, the number of people coming into the family home, concerns around parties in the family home and concerns around contact with the child's father, who has an alcohol problem and has a long standing history of domestic violence against the mother which the child has witnessed.

The child is five years old and can be quite challenging with her mother and is often vocal about how she feels about her current situation in relation to her father not attending contact. She has spoken to workers about having nightmares, which the mother dismisses, and has also expressed being scared around certain people, again disputed by her mother. The mother has three older children all of whom are in local authority care.

The mother initially engaged well and worked on a financial education programme to gauge her attitude towards finances and then began a spending diary to allow her to identify where her shortfall was. Soon after beginning this work, she began to disengage. There were often young people in the family home, although the child was at school. Many times the mother was distracted as friends were present and they wanted to play computer games. This continued over a period of two months, where engagement was superficial and relatively little work took place, despite discussions with the mother and the case-holding social worker emphasising the importance of this work.

A home visit was arranged with the mother and agreements were put in place to ensure that there would be no others present in order to allow for a focused session. At the beginning of this session, discussions took place around the reasons for the work and the issues which had been identified for support. The mother became very defensive about the household conditions and it was clear that she was disengaging. The worker then discussed the wellbeing web as a tool to allow the mother to identify strengths and weaknesses. Using the laminated prompt cards allowed the mother to have a visual tool to consider, and she was able to look at each statement under the SHANARRI headings and identify whether this was true of her situation or not, and then was able to give a score from 1-10. From being a difficult start to the session, the mother became very engaged in the process and was able to identify areas for improvement. For example, she understood that while she does provide play opportunities with friends for her daughter, she does not actively encourage any community activities.

Sometimes when looking through the cards, the mother would say that all of the areas of wellbeing applied to her and that things were excellent, but then would score herself as a 6 on the scale. Using the wellbeing web with the mother allowed for discussion and discreet challenging which led to fuller discussions around how the family situation could improve. From this, we drew up an action plan with specific actions for both the mother and the family support worker, with clear timescales, ranging from one week to two months, which will allow a clearer focus to the work and actively encourages the mother to be a part of the solution.

Having used the wellbeing web with a few families now, I feel the tool can be very useful in moving things forward and assist in empowering the family to identify their strengths and areas for improvement. There is still a need for workers to challenge, but having a visual element as part of the process allows the family to more fully understand the reasons for the input by services."